Educators value and care for all students and act in their best interests
"Educators are responsible for fostering the emotional, esthetic, intellectual, physical, social and vocational development of students. They are responsible for the emotional and physical safety of students. Educators treat students with respect and dignity. Educators respect the diversity in their classrooms, schools and communities. Educators have a privileged position of power and trust. They respect confidentiality unless disclosure is required by law. Educators do not abuse or exploit students or minors for personal, sexual, ideological, material or other advantage." 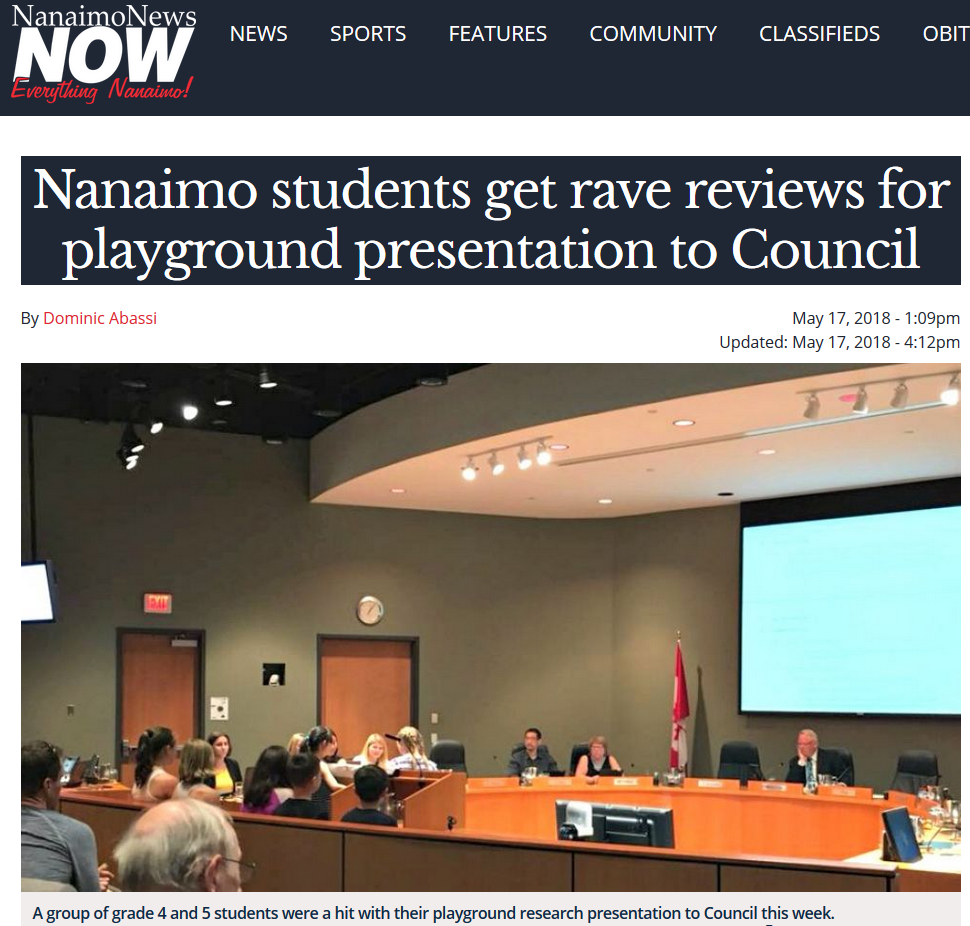 It is interesting that there are only a few occasions during the average school day when students need no cajoling to begin an activity. Lunch is the most obvious. A close second to their relishment of victuals is when recess arrives. An almost animal-like awareness seems to fill the room as the clock creeps towards this sacred hour. The students visibly tense, like stalking jaguars hidden in sub-tropical foliage ready to pounce. And then they are off onto the playground, swinging and running wildly in a most spectacular display of physical and locomotor play. Recess is like a prism, it differentiates how radically different students and educators view education. From one perspective, the educator might sigh and savour their now silent classroom, certain that real learning has stopped and frivolous play has begun which is of no import to them. Outside, however, on the swings and climbing structures the children are now in control, free to direct themselves, and they are incredibly happy. Contrary to the distinction made by those in the staff room, recess is not the death knell of learning.

As the German naturalist Karl Groos pointed out in his book The Play of Man (1901), play is crucial to the survival of the species and is born from natural selection as a means to ensure the practice of the skills needed to survive and reproduce. So while it might seem that the almost hysterical game of grounders being played outside the classroom is the antithesis of learning, the children are in fact experiencing a form of accelerated education. The psychologist Peter Gray believes this type of physical play is necessary for students to “develop fit bodies, learn to move in coordinated and effective ways, and learn to handle themselves, physically and emotionally, in dangerous situations” (p. 218). Additionally, the vitalness of socializing during recess and play is also too often overlooked by educators. In examining children’s social play, Gray explains that human beings only survive by cooperating and sharing and he is adamant that this “cannot be taught; it can only be learned through experience, and for children that experience comes primarily in play” (p. 219). And so it becomes clear that far from being a blighted black-hole of lost learning, the playground might in fact be the nucleus of experiential education that provides the basis for much of the “invisible” development of children.

Throughout my practicum at Departure Bay Elementary School, this juxtaposition between learners’ joyfulness on the playground and their ennui in the classroom was pronounced. It was almost as if the monkey bars and slides were their refuge. With this in mind, I began to explore how I might integrate some of their passion for the playground with curricular content and outcomes. It was fortuitous timing. The Nanaimo municipal council had recently began examining plans for the development of a new waterfront development that would involve the creation of playgrounds. Of course these plans were nebulous and lacked details and so I thought what better than to allow a group of real experts to generate ideas and a plan for this site that might then be shared with the Mayor and Council. And so was born my Grade 4/5 class’s community service learning activity.

I introduced the project to the class as an accompaniment to our focus on democracy and government. A great amount of emphasis was placed on the fact that their work would be grounded in real-world circumstances and that, despite their ages, their voices would be heard by members of the local government. In a sense, the work the learners would be conducting falls under the gamut of so-called “service programs”, where their ideas and research could impact their wider community. In assessing the benefits of this learning format, experiential education researcher Andrew Furco (1994) states that study results show well designed service programs enhance not only students’ academic learning but help improve self-esteem and build citizenship (p. 395). From my own perspective, creating opportunities for learners to engage with their community in meaningful ways is essential, as it allows students to prove to themselves why seemingly amorphous schoolwork can have actual value. Those old rallying cries of “this is stupid” and “what will I ever use this for” might finally be sated. As Furco says, in service programs “the learner is directly in touch with the realities being studied rather than simply reading about, hearing about, or talking about these realities - bringing context to an often fragmented curriculum” (p. 395).

To begin the project, the class itself was divided into three groups. One group began researching online for visual ideas of the modern playground while a second group read several scholarly articles relating to the social and physical benefits of playgrounds. The last group created a questionnaire that was then shared with every classroom at Departure Bay Elementary School in the hope that we might gain insight into how students use and view playgrounds. Learners were given four weeks to work on the group presentation, though in reality the majority of the project was completed in the last few hours of the final week where pie charts were hastily coloured, scripts perfected, and roles assigned. Despite a general sense of commitment from the students, my own impetus towards the project slightly cooled when I received less than ten permission slips from guardians allowing learners to attend the council meeting. As the meeting was to be held at 7pm in the evening, parents would be required to drive their children and so this created an apparent hurdle for the majority of families. Nonetheless, our project was done and our speakers were ready.

On entering the council chambers for the first time, the learners eyes grew a little wider and their glances a little more furtive. Clearly they were now nervous and unsure how they might be received by these rather stern and formal adults seated in large swivel chairs. Gathering into a small huddle, we had a calming talk and I assured them that despite the rather judicial esthetic of the room, everyone here was excited at not only their research but their novelty. Interestingly, as I sat waiting for the commencement of the council session, I ruminated on what place if any stress and nervousness has in the educational system. As classrooms migrate away from those large, all encompassing summative assessments and educators carefully season their lessons so as to guarantee the material does not illicit distress, are students being overly protected? In addressing this point and perhaps in easing my own contrition on witnessing the white knuckles of the learners, let me turn to the work of educationist Eric Sheffield (2015) who has explored more radicalised forms of service learning. Referencing the work of John Dewey, Sheffield paraphrases the educational reformist in stating that for learning to be genuine it must be sourced in emotional discomfort (p. 48). Sheffield calls this “emotional disequilibrium” and it is found in the lived experiences of service learning. He goes on to explain that the subsequent response from the learners creates an “educational potential for psychic transformation ... in the come back to the communal transformative potential found in acting to recover that equilibrium later in the discussion” (p. 48). There is no doubt in my mind that those eight learners who presented to council will remember their experience and the slight uneasiness they felt will forever cement their conception of democracy and their place within it.

The students’ presentation itself went excessively well and was received with acclamation from the mayor and council, who lended merit to the learners’ research by asking them in-depth questions. We did not stay for the ensuing politics of Nanaimo’s legendary civic dramas but instead retreated to the foyer for photos and a chance for the learners to shake out their nerves.

In assessing how this exercise pertains to Standard 1 of the Teacher Registration Branch (TRB), I would not hesitate in attesting that the footwork required in facilitating this project is indicative of “fostering the emotional, esthetic, intellectual, physical, social and vocational development of students”. The skills and learning required by the students to develop the presentation fit comfortably into the realm of intellectual development, while their ability to prevail over their nervousness and succeed in speaking before council corroborates development in their emotional and social skills. Lastly, this opportunity for the learners to experience and even enter within local civic politics will hopefully engender a long-term interest in their democracy and potentially direct a few towards the vocational potential of politics. There is also an overarching ethos in the development of this project that articulates another aspect of Standard 1. In presenting the learners with this opportunity, a level of conviction in their abilities was on my part required. I had to have an element of faith that they would produce research of value and then present it successfully on a date scheduled weeks in advance; if we had pulled out or delayed, we would have irreparably affected the chances of other student groups presenting in the future. My certitude in their abilities fits well with the standard’s call for “educators [to] treat students with respect and dignity”.

Standard 1 of the TRB contains some of the most vital codes needed by a successful teacher. Importantly, it is focused not merely on the intellectual development of the child (the educator’s old refrain) but extends its spotlight out to those other characteristics that for too long have been ignored. If educators strive to honor this screed, then room will be finally made for the emotional, esthetic, physical, social, and vocational development of their students. I believe that through a more radicalised approach to learning, one that occurs both in and outside of the classroom where learners are afforded trust in their abilities, the results of Standard 1 might just be achieved.

Furco, A. (1994). A Conceptual Framework for the Institutionalization of Youth Service Programs in Primary and Secondary Education. Journal of Adolescence, 17(4), 395-409.