Educators are role models who act ethically and honestly.
"Educators act with integrity, maintaining the dignity and credibility of the profession. They understand that their individual conduct contributes to the perception of the profession as a whole. Educators are accountable for their conduct while on duty, as well as off duty, where that conduct has an effect on the education system. Educators have an understanding of the education system in BC and the law as it relates to their duties." 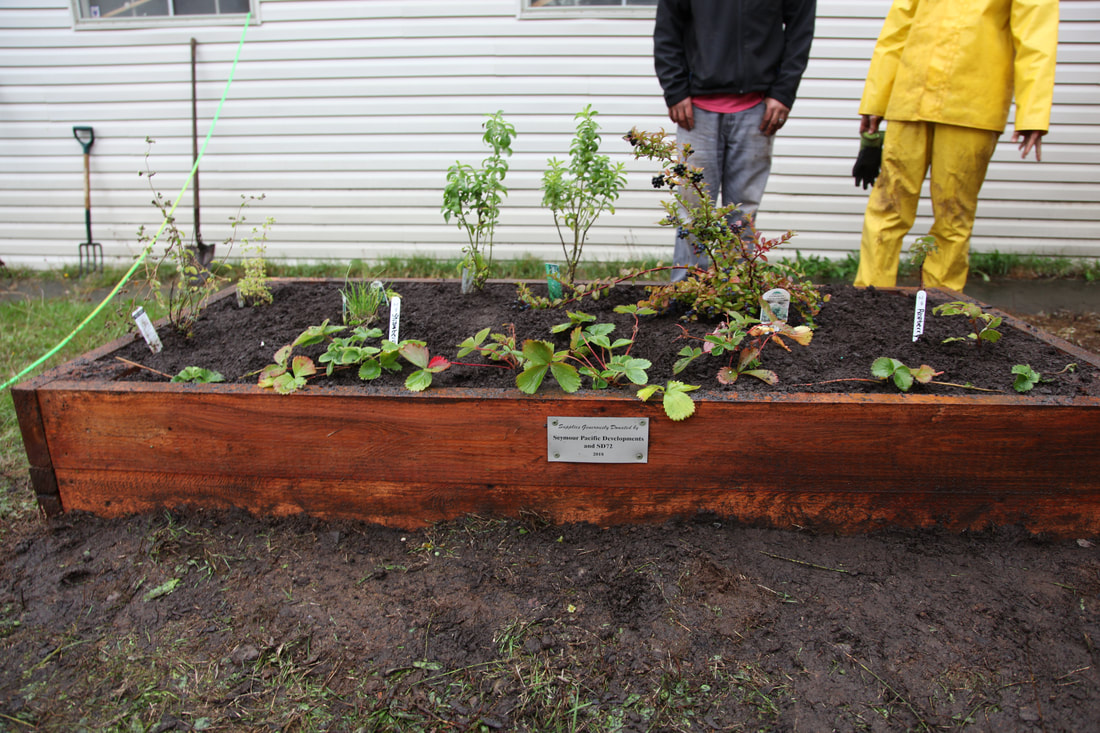 Of course it would be raining. The one day we had picked to begin our Community Action Project (CAP) began with a steady downpour. Little could be seen beyond the low buildings of the Laichwiltach Family Life Society, the clouds seeming to reach down to the very ground. Inside the buildings, the staff at the centre were setting about their day, preparing to offer services such as family therapy, addiction recovery, and child and youth counselling to the Indigenous community in Campbell River. Outside we were slipping on rain gear and carrying tools around to the back of the premises, an open area that borders onto the campus of the nearby Cedar Elementary school. Out here, between the rather ramshackle outbuildings, was our chosen location for the raised garden beds that we had decided we would build for the benefit of the children of both Cedar Elementary and Laichwiltach.

Soon the saws were spinning and the smell of cedar infused the air. We worked through the rain, drilling and then later tossing shovel loads of soil into the newly built beds. Finally, our work was complete and Audrey Wilson, the executive director of the centre, came out for a quick ribbon cutting ceremony. There was no clapping crowd or flash of cameras but we did not need any of that. We all felt that we had made a worthwhile contribution to the local community in the building of three raised beds made from local cedar that should reasonably last for many years. In using this new garden, it would now possible for students at Laichwiltach and Cedar Elementary to begin to understand the natural cycles of food production and to enjoy a harvest of their own making. Our decision to locate the raised beds at Laichwiltach was also strategic in that we knew many school gardens often slip into disorder during the summer holidays but because the centre was operated year-round, staff would be able to keep the weeds at bay and provide the waterings that might be needed. Overall, we were satisfied that our work would make a concrete addition to the community and initiate learners into an understanding of healthy foods and diets.

As a team, it is my belief that our work to build this small community garden was guided by an ethical mindset that sought to bring about positive change. Through a concerted effort to make a meaningful contribution to the lives of students at Cedar Elementary and Laichwiltach, we focused our energies to gather donations and funds that would make the community garden a reality. As pre-service teachers, our actions were closely aligned to the provisions of Standard 2 of the Teacher Regulation Branch (TRB) that calls for teachers to be “role models who act ethically and honestly”. In our interactions with potential sponsors and the staff of Laichwiltach itself, we maintained professional correspondences and upheld all promises or agreements that were made. Even while we were not on-duty as teachers during our community project, we ensured our conduct was considerate and which, as Standard 2 entails, “contributes to the perception of the profession as a whole”.

Our group’s commitment to the project will extend beyond the initial building process. We have made arrangements with teachers from Cedar Elementary to create lesson plans for each grade for when spring arrives and seeds are ready for planting. As part of the planning process, we all agreed that to truly support the development of the gardens our engagement needed to be more sustained than just physically building the garden. By sharing lesson plans with interested teachers, I believe we will show that we are acting with “integrity, maintaining the dignity and credibility of the profession”, as per Standard 2 of the TRB. Additionally, the Standard itself will also stay with me as I move forward in my practice as it is a good reminder of the important role perception plays in the field of the public education. The fact that the eyes of parents, students, and the community at large will always be focused on the teacher is indisputable, as the educator plays a vital role in not only the mental development of learners but also their emotional and ethical growth. Teachers are exemplars to their students who at times might struggle to find appropriate role models. In this way, I believe the provisions of Standard 2 are essential and should be an important reference for not only the teaching process but also in guiding one’s demeanor throughout the school and beyond.